Given the sudden onset of some rather chilly (and snowy) weather; I thought it would be worth taking a quick look at how early Pullman experiences freezing temperatures. There are two metrics I’ll be looking at: the first day after July 1 where we record a minimum daily temperature (TMIN) below freezing and the first day after July 1 we experience a maximum daily temperature below freezing (TMAX); if we even experience it at all. The data used here comes from the USDA’s Palouse Conservation Field Station co-operative weather station located just northwest of town which has been recording and reporting daily weather information almost continuously since at least 1941 (there are a few days missing here and there, no one’s perfect), if not longer. To compare across years, the dates were converted to day-of-year (e.g., Jan 1 is Day 1, September 1 is Day 244); I will convert day of year to calendar date in the text as I discuss different features.

Per the data (Figure 1); the average first day Pullman reaches freezing for a TMIN is September 25 or September 26 (day of year 269-270). On any given year, TMIN varies by about 25 days in either direction. So, it generally gets cold starting beginning of September to as late as end of October. This year (2020), the first day TMIN reached freezing was October 21 (day of year 295) so while on the late side compared to many previous years, it is not uncharacteristically late (or early for that matter). This is specific to the temperature reaching a somewhat arbitrary value (freezing), so I make no claims about it being a turning point between seasons or being associated with snowfall or frost. For 2020, it happened within a couple days of a decent snowfall but a few days later and the snow is mostly melted, and the temperatures are warming back up (slightly). 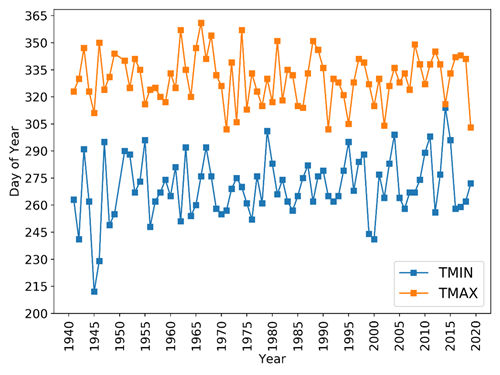 The first day the TMAX reaches freezing temperatures is relatively more consistent, with the mean value being November 24-25 (days of year 330-331), again varying by about 20 days earlier or later. The earliest this occurs is typically in late October (Oct. 25, day of year 300) but can be as late as the end of December. Some of these years, a TMAX of freezing is hit only once or twice and some years it is a constant phenomenon (topic for another time, maybe another deeper dive a la the pleasant days posts).

So, to all you (myself included) who think winter is coming, or the cold is here late or early, the answer is: "yes".