How pleasant is Pullman's weather: A deeper dive

So, there were some conversations about doing the same pleasant day calculation but to take into account just the period of day when people are generally active. In part, this came from the discussion of the diurnal temperature range and the minimum temperature as they relate to the criteria used and from my own curiosity. Three notes before delving into the results: 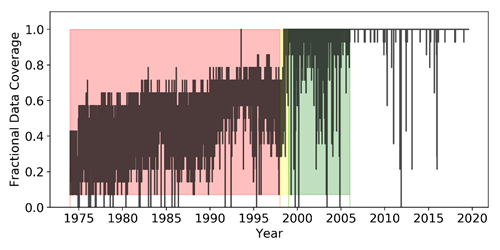 With that out of the way; let’s go!

With the restriction of timeframe, the number of pleasant days per year (PD) increases (Figure 2). This should not be surprising if you read the previous post as this analysis constricts the diurnal temperature range by limiting the analysis times attempting to reduce the impact of the minimum temperature on the number of PDs. The general shape over time remained similar for the used 20 year-period as the original (Figure 2). There is a lower but consistent number of PD between 2006 and 2013 from those years being generally cooler than surrounding years. With the differences in data coverage, the number of years, and general shape of the trace, whether the number of PD’s are increasing or decreasing is difficult to diagnose…but some speculation will occur later. 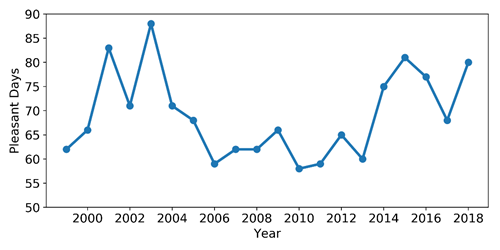 Figure 2. Number of pleasant days per year from 1999 to 2018 using data between 7am and 8pm with the same temperature and precipitation criteria as in the original post and listed in the introduction.

The number of days passing the precipitation check has decreased overtime (Figure 3). In 1999, about 65 days had measurable precipitation and, according to this data, by 2016 that number had increased to closer to 100 days. A deeper analysis of this data is warranted but not in this post. This analysis does not extend to the total amount of precipitation per day and includes days with trace precipitation (defined as less than 0.01 inches) as “precipitation days”. In general, the Pacific Northwest has experienced a varied change in precipitation over the last 100 years, with a relatively consistent but small increase in spring precipitation (Abatzoglou et al., 2013). Precipitation is a highly localized variable, hence the higher level of variability compared to changes in temperature in the region. 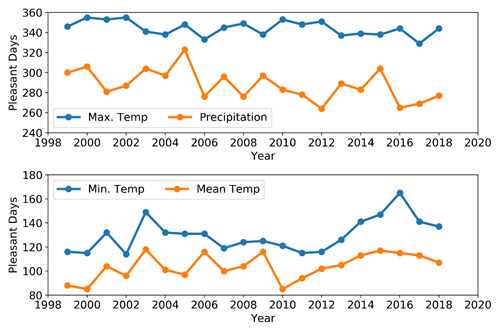 Figure 3. Number of days per year that pass each of the four criteria for a pleasant day. The top panel has maximum temperature and precipitation. The bottom panel has minimum and mean temperature.

Max temperature (Tmax) was the least restrictive component to this analysis (Figure 3, top panel) and stayed relatively consistent across the timeframe with a slight downward trend over time, meaning an increase in the number of days with maximum temperatures above 85F over time. The annual maximum temperature has increased over time for this region but is still generally under 100F (Figure 4). The same pattern was observed in the daily data as well. The max pleasant day limit is 85F and such warm temperatures are still relatively rare around Pullman (20-30 days per year) but are slowly increasing. The maximum temperatures in the Pacific Northwest have been increasing by a couple tenths of a degree Fahrenheit per decade for the last 100 years (Abatzoglou et al., 2013) which accounts for this slow march upward.

The biggest culprits for not having a pleasant day are the mean temperature (Tmean) followed by the minimum temperature (Tmin) (Figure 3, bottom panel). This was mostly from the wintertime periods as even the daytime temperature is generally outside the criteria for a pleasant day from fall to spring (Figure 4). Just the winter temperatures negate the “pleasantness” on the order of 150 days per year with the exact number based on the timing of the seasonal transitions (approximately October-March). This dataset is too short to make any comments on longer-term trends but over time, but assuming a warming climate, the number of pleasant days could fluctuate or increase with how the mean, maximum, and minimum temperature interact. The minimum seasonal temperatures have been increasing in the last 100 years,, with the increase being stronger in the colder months (Abatzoglou et al., 2013).

The mean temperature is defined here as: 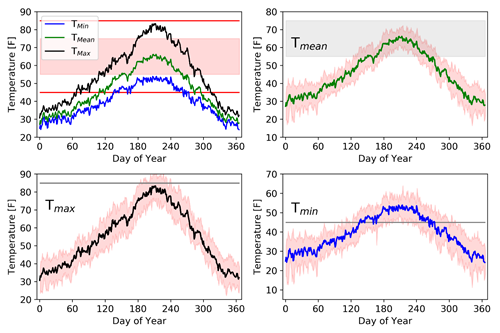 The shading in the top left panel is the mean temperature range and the red lines are the minimum Tmin and maximum Tmax allowed with these criteria. The lines are the mean over the 20-year period and the shading in the other three plots is one standard deviation from the 20-year mean. As can be seen, there are times with the Tmean is outside the acceptable range but Tmin is high enough. Increasing the averaged Tmean just one degree would increase the number of pleasant days and would result from increases in either Tmin, Tmax, or, most likely both. As the climate changes and warms, all three of these lines will shift upward meaning the general climatic temperature any given day will be warmer. In this specific construct; an increase in the minimum temperature could change the number of pleasant days through both the minimum and mean temperature.

I don’t want to get misinterpreted that climate change is good because it means more pleasant weather days; there are very real and very serious consequences from the warming temperatures and changes in the climate that far outweigh a few more pleasant days per year. This exercise is meant to be a more relatable and fun way to look at temperature and precipitation for Pullman over the last 20-50 years than just reporting quasi-abstract temperature and precipitation statistics.