During CAF LTAR's DataCAFe, Qiuping (Ellen) Peng led a discussion on different methods of calculating mean residence time (MRT) of soil organic matter. After much discussion and merriment, Ellen then tried to steer the crowd towards a discussion on how to relate MRT to flux data from EC towers. Her write up is below.

Understanding the turnover rate of soil organic carbon (SOC) is essential to accurately estimate carbon budget and predict ecosystem response to future global climate change (Scharlemann et al., 2014; Schmidt et al., 2011). More importantly, through the turnover rates of SOC, we can better understand SOC residence time and identify what practices are effective in sequestrating SOC that persists longer in an ecosystem (Schmidt et al., 2011). Simultaneously, it can be helpful for land managers to assess their soil quality and adapt their management in an early stage before soil degradation happens (Awale et al., 2017). 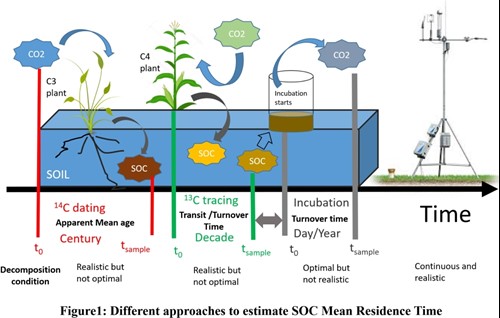 It is worthwhile to note that the turnover rates of SOC calculated from these four methods are actually targeting different pools at various stages due to decomposition process related to variable climate and vegetation types, which lead to challenges of SOC pool comparison across samples, regions and methods.  Furthermore, MRT reported in a larger timescale become less meaningful in providing instant and informative assessment for land managers in a short timescale. More importantly, the fast-cycling SOC pools, which determines the soil as a carbon sink or source and system sustainability, is more sensitive to changes in the environmental factors and land management (Crow and Sierra, 2018). Therefore, we ask the following questions: